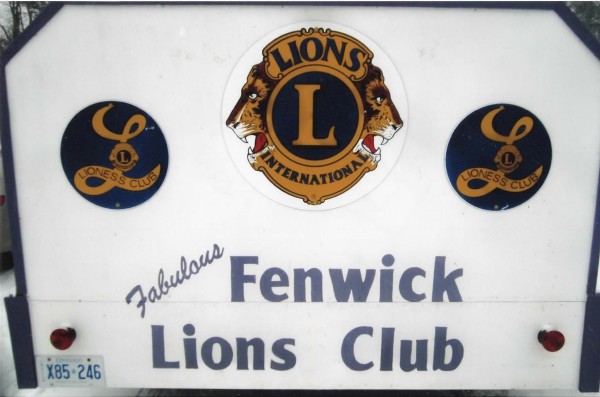 In early 1949, some members of the Fonthill Lions Club encouraged a group of community minded men to form a Lions Club in Fenwick. Thus, on Tuesday, May 3, 1949, 28 young men met in Pelham District High School for dinner and to receive their charter membership scroll in the Lions club International. Presenting the charter to the new Lions club President, Bernard Babcock, was International V.P. Lion Walter Fishers of St. Catharines, who was to become the first Canadian to hold the office of President of Lions International. Lion Vern Haist is the last of the charter members still active in our club. The first club meetings were held in the Ladies Institute Hall on Maple Street, now the home of the Model Train Club. The Ladies of the Institute served dinner to the Lions. It was here that I was inducted into Lionism in 1965. In can recall Lion Elmer Gibbons and Lion Shel Shapland shaking the very foundation of this building as they stomped to the tune, ‘There is something about a Lion’; Lion Bud Ker’s lengthy monologues; Lion Alf Myers’ reports of his hunting and fishing fiascos; and Lion George Cook selling those darn tickets. Fundraising ventures in the early days included such activities as yearly bulb blitzes chaired by Lion Tom Pattison and Lioness Marg Pattison; turkey and ham raffles organized by Lion George Cook; the food booth at the Wetland Fair, a joint venture of the Lions and Lioness; and Donkey Baseball in which Lion Alf Myers started the game by riding a galloping jack-ass to third base. Other fundraising activities included draws and dances. The Volume 5 Orchestra used the hall for its weekly practice and in return provided music at one of our functions at no charge.

The following is a list of services, activities, and donations prior to 1967: • Purchased land to build a floodlit baseball diamond, now diamond #1. Entrance to the diamond was by the road allowance north of the Rosinski Apartment; • Purchased additional land to provide location for scout hall, parking for ballpark, and an asphalt tennis court. The Lions helped the scout executive build the scout hall using building materials donated to them by Atlas Steels. For some reason, the scout executive gave up on the scout hall and the Lions assumed ownership. Construction projects at the Lions Hall have, been many and varied. This year, 1989, 35 years later, we are still digging and building. We hope to see final construction completed in 1990. The majority of the labour involved was done by the Lions. From the beginning, the hall has been available for community nonprofit groups free of charge; • District A-2 Public Speaking. This is a yearly event and was won the first time by Dr. Ronald Dowd. This year’s winner was Lori Beida; • Annual Soap Box Derby. The race started at Pelham District High School and proceeded westerly towards the town line (Regional 24). One year we had a winner who went on to compete in an International final in St. Louis; • Minor Baseball. A Lions sponsored Juvenile Softball team won the All Ontario Championship in 1955. Numerous O.B.A. championships were played and won on the Lions baseball field; • Tennis Court and Ice pad. The first tennis court was constructed in 1960. It had an asphalt pad with asphalt curbing. This was done to allow tennis in the warm weather and ice skating in the cold weather. Prior to the construction of the tennis court, the Lions had built the ice pad on the ball diamond. I wish I had a penny for each gallon of water that Lions Doug Disher, Bud Ker, Bill Rogers, Tom Pattison, Merle*Berry etc. used, almost on a nightly basis, to flood the ice pad. Nightly supervision was also provided by the Lions and;• Christmas lights are provided by the Lions in downtown Fenwick. Work parties and get togethers for fun and fellowship were common experiences. We had a weekly get together every Thursday evening called ‘Dino Martino’ Night. All Lions, wives, and friends were welcome to watch Dean Martin on T.V. and participate in card games and dancing, ‘fun in service’. I recall one night we had a broom ball game with the Welland Lions and their wives on our ice pad. Lion Bob Fox of Wetland nearly lost his artificial leg that night. Bull sessions around the fireside after a Friday business meeting usually ended in time for a trip to the Welland Market, Saturday morning. Lion Larry Vasas was easily coaxed to get his ‘squeeze box’ for a sing-a-long. We made our own fun and in the process Lionism prospered. In 1967, the Township of Pelham was looking for a Centennial project. The Lions turned over the ownership of the Lions Park to the Township, retaining sufficient land to house the Lions Den. Federal funds were used to improve and maintain a new and bigger Centennial park. The Lions still support the needs of this recreational facility. The annual Christmas turkey raffle is one of our biggest fundraisers as well as the ham raffle at Easter. Bingo, organized by Lion Bud Arnott, three years ago, has been a good source of funds for community projects. The food booth operation keeps the Lions active during the summer months. The annual Carnival in May is also a big money maker.

The following is a list of services and accomplishments post 1967: • Donated funds and labour for the expansion of Centennial Park’s #2 and #3 baseball diamonds; • Built a soccer field and a top grade tennis court; • Constructed a food booth in 1980 to serve the public during sporting events at Centennial Park; • Donated swings, slides, a turnabout, climbers, and other playground equipment, built bleacher;. • Built a cenotaph at Centennial Park; • Constructed public washrooms at Centennial Park and; Donations were made to the following: Pelham Arena, seeing eye dog, crippled victims, Santa visitations, upkeep of the cenotaph, extensive support for E.L. Crossley Band (uniforms, banner, instruments), scholarship fund, provided benches in downtown area, and purchased an emergency stretcher for the Pelham Arena. During this time we revamped the May Carnival with a family affair theme. Yearly eye examinations for preschoolers were conducted. Support for numerous Lions projects at International, District, and community levels continues. 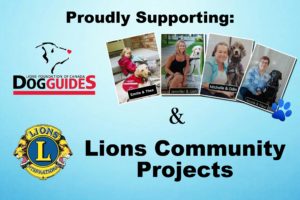